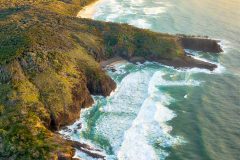 Noosa is well known in Australia thanks to its beaches, surf and tropical climate. It’s a busy place over the summer and school holidays as Aussies flock to the little town on Queensland’s Sunshine Coast to soak up the sun, waves, and outdoors. Noosa has a reputation as being a bit of a tourist town, which is a little unfortunate because there is so much more to Noosa than Hastings St and Main Beach.

One of Noosa’s biggest attractions is Noosa National Park. The park is located right on the tip of Noosa Headland at the north end of the Sunshine Coast. It has a large network of walking tracks allowing you to enter and exit at multiple points. The most popular entry point is right off Hastings St. The walking tracks follow along the coast past a number of bays where you can watch surfers catch some of the longest waves in Australia. Parking at the Hastings St end can be a hassle, so I would recommend entering at the Sunshine Beach end of the park.

From Sunshine Beach, the track takes you up and over the headland, past high cliffs overlooking rock formations with ominous names like Devil’s Kitchen and Hell’s Gate. Alexandria Bay is a long, beautiful white-sand beach that is usually pretty quiet due to the half-hour walk from the nearest car park (and the nudists who seem to have claimed the beach as their own personal sun-bed).

Noosa National Park provides so many options for a landscape photographer that you would never get tired of photographing it. The beaches and rock formations alone could keep you occupied for months. There are also koalas in the park as it’s a wildlife sanctuary, although I wasn’t fortunate enough to see one there.

I recommend getting down to the Sunshine Beach end for sunrise, but be careful on the rocks, there’s a good reason why they call it Devil’s Kitchen. I also recommend visiting Little Cove at the Hastings St end for sunset. Watching the surfers as the sun goes down over North Shore is pretty hard to beat. The Fairy Pools are also a great place for a dip as long as the tide isn’t too high.

If you’re a photographer, or even just a nature-lover, be sure to pay Noosa National Park a visit. Spend a day or two exploring and swimming, and don’t forget to look up in the trees for koalas!