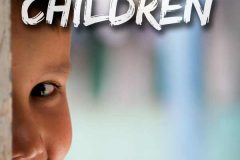 I am one of those people who naturally gravitate children. Apparently, I was always that child who wanted to hold the baby. Any baby. It’s just the way I am. I guess that’s what drew me to become a paediatric nurse. It’s also probably why I love to photograph children when I’m traveling.

Photographing children needs to be approached differently to other subjects, though. There are ethical considerations, which is another post altogether, but I want to show you a few tips that will help you to improve your child photography. Whether you’re photographing your kids or you’re trying to improve your travel photography, I’m sure you’ll find these helpful.

Put Them In Context

There is a tendency to want to photograph children the same way we do adults. Use a long lens and wide aperture to blur the background and make a lovely portrait. It isn’t wrong, and as you’ll see, I still do that. But showing kids in their own environment tells more of a story and shows their personality. It shows the viewer the world that child lives in and the things that are important to them. Try using wider lenses and taking a more documentary-style approach.

Let Them Be Kids

If you’ve spent any time around children, you’ll know that they’re not very good at staying still. Or doing what you ask them to. Or behaving like adults. So don’t try to make them. Let them be kids. Let me be cheeky. Show them doing the things that kids do. Playing games. Making a mess. Having tantrums. Making faces. They’ll give you much more authentic, engaging photos if you let them be themselves.

Get Down To Their Level

One of the defining characteristics of children is that they’re small. Babies are even smaller. If you want to show the world they live in, get on their level. Bend your knees. Sit on the floor. Lie in the mud. Get dirty. Kids spend enough time looking up at the world without us making them look up and smile for the camera. They’ll respond much more warmly and naturally to you if they see you’re willing to get down on their level.

Be A Big Kid

This goes hand-in-hand with the previous tip. Get on their level mentally. Nothing will help you engage more with a child than being childish. This will come more naturally to some than others. Some people never really grow up. You don’t have to be a clown if that isn’t you, but playing games, making faces, laughing, and being more child-like will go a long way. Get on the other side of the camera and let them paint your nails pink from time to time.

Don’t just photograph the child, photograph them with the people in their world. Their parents, brothers and sisters, and friends. Some of my favourite photos of children from my travels are those which show siblings or best friends. Capturing the bond between children makes for highly engaging photos.

Although this isn’t something I do often, and in many ways goes against my standard approach to photographing children, sometimes you can shoot kids the same way you would an adult. I don’t have any rule for when I would or wouldn’t do this, it’s just something I might do if I feel it. I don’t pose them, but I do sometimes zoom in or get in close and isolate them with a shallow depth-of-field the way I would a headshot.

Let Them Forget You’re There

This is the opposite of the previous point, and ties in more with my earlier tips about photographing them in their context and letting kids be kids. Sometimes as soon as a camera appears, it’s like a circus, and every child within earshot will be brawling to get in front of your lens. This is unavoidable in certain circumstances, but if you can avoid this hysteria and continue to photograph them when they’ve forgotten there’s a camera present, you will often get some fantastic candid photos which can really display their personality. Of course, this requires some wisdom. Don’t be the guy photographing children from the bushes in a playground.

Not everyone likes kids, I get it. Some people hate kids. If that’s you, it’s probably best for everyone if you avoid them. For the rest of you humans, I can’t stress how much enjoyment you can get from taking a more kid-friendly approach to photographing children. It can be a little stressful sometimes, but it can be so rewarding. Who knows, you might even have a little fun!